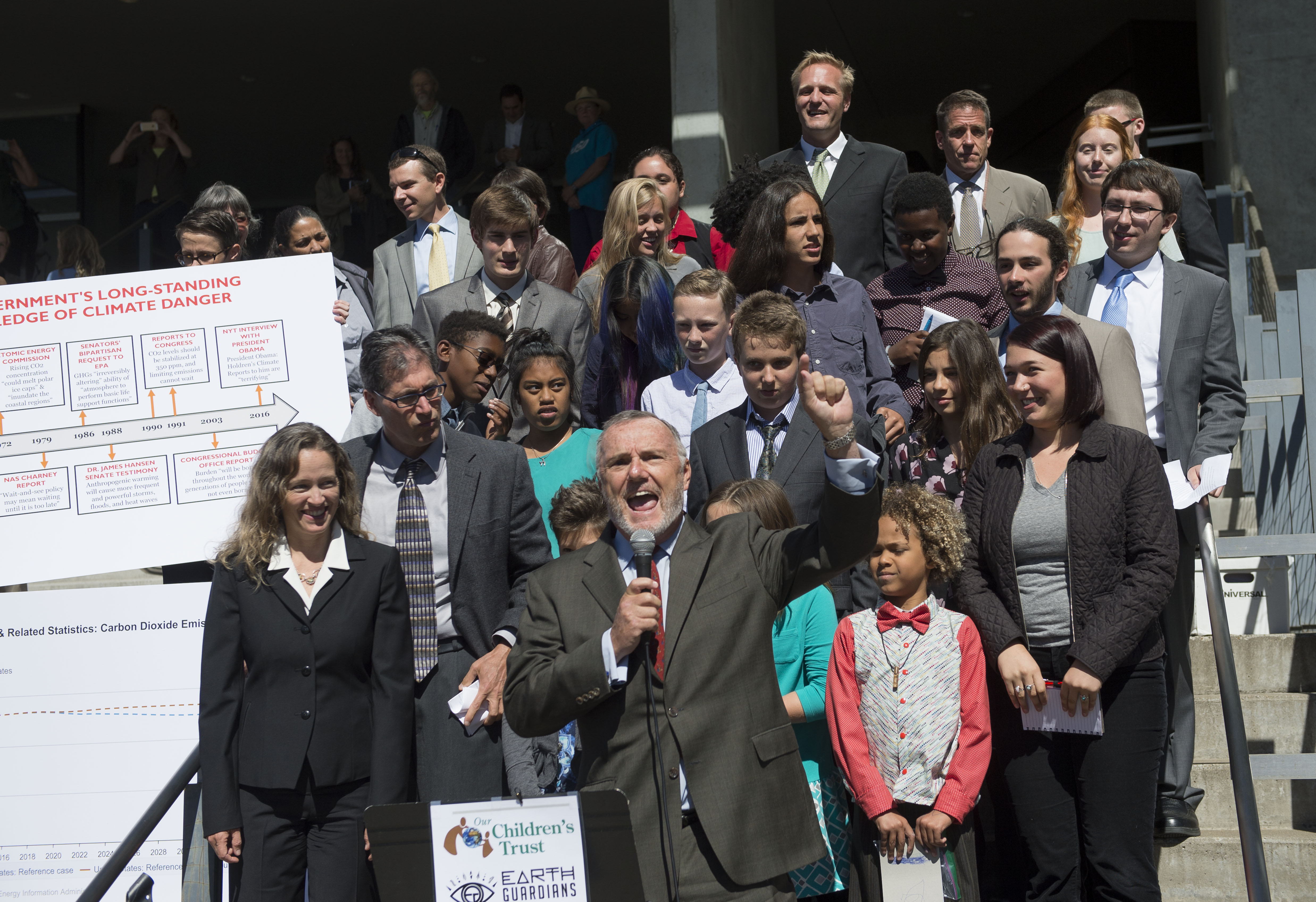 Attorneys representing 21 youth in the Juliana v. United States climate lawsuit have filed opposition briefs to Trump administration and fossil fuel industry defendants’ motions that sought again to derail the case from trial. In their filings, youths’ attorneys argue that “any delay in resolving the merits of this case irreversibly prejudices the Youth Plaintiffs in securing and protecting their fundamental constitutional rights.”

Attorneys representing youth filed three responses Monday. The first response was to the U.S. government’s request that U.S. District Court Judge Ann Aiken allow the Ninth Circuit Court of Appeals the opportunity to review her November 10, 2016 order denying motions to dismiss before the trial even takes place. From theyouth’s brief:

“Federal Defendants’ argument that ‘no relief could be obtained against the President,’ ...is substantially similar to one flatly rejected by the Ninth Circuit as ‘contrary to the fundamental structure of our constitutional democracy’ in Washington v. Trump, in which the current president argued that he had ‘unreviewable authority’ with respect to immigration policy ‘even if those actions potentially contravene constitutional rights and protections.’”

The second filing responded to fossil fuel defendants’ similar motion for an early appeal, which complained that “complex scientific debate...swirls around the issues raised by the plaintiffs’ lawsuit.” The third filing was in response to both the Trump administration and the fossil fuel defendant’s attempts to put the trial on hold, in the event Judge Aiken grants their requests and the Ninth Circuit agrees to step in.

Per federal rules of procedure, Judge Aiken, informed by Magistrate Judge Thomas Coffin’s recommendation, holds the power to decide whether the Ninth Circuit has an opportunity to grant the defendants’ requests for an interlocutory appeal of her November decision.

“The Trump administration and the fossil fuel interests have acknowledged our lawsuit is a threat to their profit-seeking motives. Their move to appeal Judge Aiken's historic decision to hear our case is nothing more than an extension of their personal interests and preposterous climate denial. These interests render their moronic dismissal of the merit of the constitutional rights that my co-plaintiffs and I, as well as future generations have to a stable climate system.”

Jacob Lebel, 20, youth plaintiff from Roseburg, OR, who is currently in D.C. as a correspondent at the 2017 Planet Forward Summit, said:

“It’s laughable and darkly ironic to hear our government argue that it will be irreparably harmed by our request that it produce and preserve documents that deal with climate change. What about the irreparable harms that President Trump’s administration is inflicting upon us youth with its reckless promotion of the fossil fuel industry and attacks on climate science? For over half a century, our government has played at delay and deny—  the only thing that should be expedited now is our trial.”

“The Trump administration appears to labor under the mistaken belief that its decisions are beyond the jurisdiction of constitutional review. As we’ve already seen, when President Trump puts travel bans in place that violate constitutional rights, courts can and will block those actions. When he takes alarming actions that deny our youth plaintiffs their fundamental rights to a safe climate, courts can and will block those actions as well.”

On Friday, attorneys representing the youth served legal requests for documents to the Department of Agriculture, Department of Defense, and Department of State, just a few of the agency defendants in the case. The requests are a timely part of the discovery process, aimed at getting to trial by fall as Judge Coffin has requested.

Last month, attorneys representing the youth served requests for production of documents to the U.S. government and the American Petroleum Institute (API) asking both defendants to turn over any of Secretary of State Rex Tillerson’s pseudonym emails in their custody (emails sent from “wayne.tracker@exxonmobil.com”) by April 16, 2017.

A telephonic case management conference, with Judge Coffin and attorneys representing all the parties, is set for Friday, April 7, 2017 at 10:00 AM PST.

Juliana v. United States was filed in 2015 by 21 young plaintiffs who argue that their constitutional and public trust rights are being violated by the government’s creation of climate danger. Judge Aiken’s November order denied motions to dismiss brought by both the Obama administration and fossil fuel industry defendants.

Juliana v. United States is one of many related legal actions brought by youth in several states and countries, all supported by Our Children’s Trust, seeking science-based action by governments to stabilize the climate system.

Our Children's Trust is a nonprofit organization, elevating the voice of youth, those with most to lose, to secure the legal right to a healthy atmosphere and stable climate on behalf of present and future generations. We lead a coordinated global human rights and environmental justice campaign to implement enforceable science-based Climate Recovery Plans that will return atmospheric carbon dioxide concentration to below 350 ppm by the year 2100. www.ourchildrenstrust.org