Business Leaders: “We Are Still In” on Paris Climate Agreement 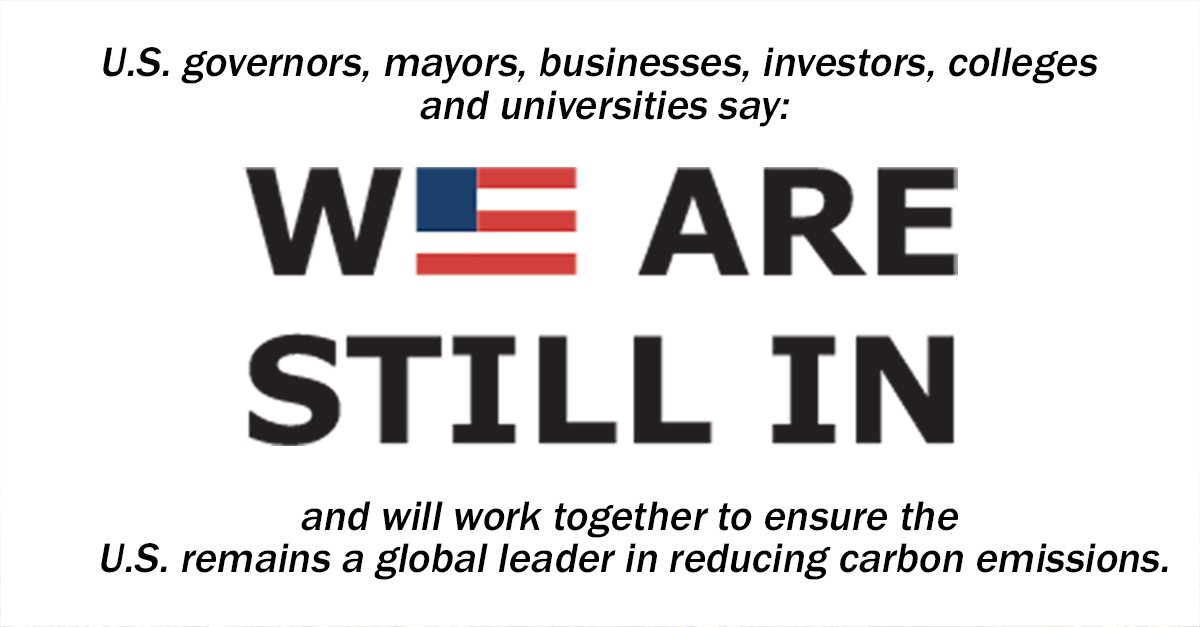 (Washington DC) Over a thousand U.S. governors, mayors, businesses, investors, and colleges and universities, including Mercury Press International, representing the broadest cross section of the American economy yet assembled in pursuit of climate action, today declared their intent to continue to ensure the US remains a global leader in reducing carbon emissions.

Mercury Press is proud to participate with this unprecedented collaboration to stand for the Paris Accords and the health, climate and economic benefits it allows. We see this issue as the defining one of our times, and see it as urgent to take every action possible while we can.

Together, these leaders are sending a strong signal to the international community and the 194 other parties to the Paris Agreement about the continued commitment of the United States to ambitious action on climate change absent leadership at the federal level. In the aggregate, the signatories are delivering concrete emissions reductions that will help meet America's emissions pledge under the Paris Agreement.

Signatories number over a thousand, and include some of the most populous states and cities in the US, including California and cities like New York, Los Angeles, and Houston as well as smaller cities like Pittsburgh, Pennsylvania and Dubuque, Iowa. A mixture of private universities, state schools and community colleges, both small and large, have added their institutions to the statement. More than a dozen fortune 500 companies in addition to hundreds of small businesses have also signed the statement.

The statement calls the Trump administration’s decision to pull the U.S. out of the climate accord “a grave mistake that endangers the American public and hurts America’s economic security and diplomatic reputation.” The signers all understand that the Paris Agreement is a blueprint for job creation, stability and global prosperity and that accelerating the United States’ clean energy transition is an opportunity – not a liability – to create jobs, spur innovation, promote trade and ensure American competitiveness. By declaring that “we are still in,” the signatories are putting the best interests of their constituents, customers, students and communities first while assuring the rest of the world that American leadership on climate change extends well beyond the federal government.

In addition to this statement, since President Trump’s announcement to withdraw from the Paris Agreement, at minimum 211 Climate Mayors have adopted the Paris Agreement goals for their cities, currently 9 Governors have formed the bipartisan Governor’s Climate Alliance, and at least 17 governors have released individual statements standing by Paris. Today’s statement embraces this rapidly growing movement of subnational and civil society leaders, by announcing that not only are these leaders stepping forward, they are stepping forward together.

To view the full statement, quotes and list of signatories, visit: www.WeAreStillIn.com

business climate paris agreement US leaders Mercury Press
Please check your e-mail for a link to activate your account.