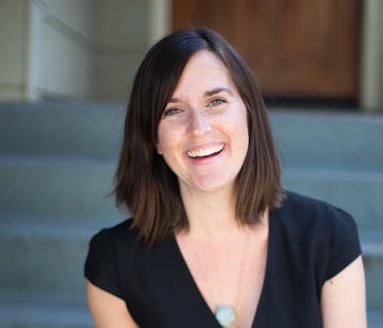 Sarah Shanley Hope directs the 100% Campaign and The Solutions Project, dedicated to speeding up the global shift toward 100% renewable energy, possible by 2050. Her second last name fits her like a glove.

“When you lose hope it’s because you’re not doing enough,” said Mark Ruffalo, one of the founders of The Solutions Project.

“I would add, you lose hope when you're not active or in a community, when you’re not in relation to other people,” she says with a smile. “I used to be the executive director of the Alliance for Climate Education, which works with hundreds of thousands and reached millions of high school students, and they're taking action. They're not waiting for government to act. They're not waiting for a particular NGO or a particular celebrity to tell them what to do. They’re seeing the opportunity to drive solutions in their communities and together with their friends. The Solutions Project and the 100% Campaign are tapping into that energy to move from a place of total fear, and in many places total confusion, to just start acting."

Sarah has always been an optimist. Growing up in Buffalo, New York, where the economy was built around the steel industry, she witnessed many jobs lost in the last 75 years, and how people pulled forward regardless.

Politics can help change the system, but market forces can also create change. “The barriers in California are removed, to where I can afford to have solar panels on the roof and an electric vehicle, both without having to pay anything more than what I was paying before, even saving money,” she says, pointing at the panels on the roof of her Oakland home. “If you’re in a place that doesn’t have access to affordable clean energy because of the political barriers, you’re going to start to demand that. For many households and schools, solar energy is totally affordable, like getting an electric car, or doing energy improvements in the home. These are actions you can take right now, not just to help the environment, help create jobs, or make you feel cool because of the new technology, but actually to save money. There is a hopefulness in that.”

Although more people are talking about climate change, it’s not a new issue. “Eight years ago, every United States presidential candidate, Republicans and Democrats, had a green jobs plan,” recalls Sarah. “We forget that this kind of economical development and job creation plan, with the intention of addressing climate change, was a part of a bi-partisan agenda.” That the climate change bill didn’t pass changed the tide, but now there’s a swing back. “Now we don’t only see the Pope and Obama talk about climate, but also Hank Paulson, and the CEOs of Amazon and Ikea,” Sarah adds. “My prediction is that you’re going to see a lot of Republican leaders speaking about solutions.”

Language is particularly important. “‘Global warming’ and ‘climate change’ cause political division, but ‘clean energy’ doesn’t,” explains Sarah. “When Republican candidates met in Iowa nine months ago, they were all speaking of wind energy and solar because the governor of Iowa had just signed a solar bill into law. 40% of the energy in Iowa comes from wind and solar. That’s remarkable. It’s a red state! And from a market perspective, they’re serving the demands for clean energy of surrounding states.”

Is the idea of 100% renewable energy by 2050 too optimistic? “It's aspirational, but I don't think it's too optimistic. 80% of New Yorkers believe 100% is possible. That’s the opportunity.”

100% means for all citizens. It’s a priority. “If we remove barriers to consumer adoption such that everyone has access to affordable clean energy, you will have political support,” Sarah explains. “It’s not only the government, community organizers and NGOs, it’s not only the businesses; it’s all of us moving in that direction.” Today there are more jobs in solar than in the coal industry in the US. For Sarah, there’s the possibility: “Communities don’t have to keep investing in dirty and polluting industries.”

Spain was a renewable energy leader until the government of Partido Popular came into power. Shanley Hope sees a parallel in Arizona, which also used to be a renewable energy leader. “The electric power monopolies and the status quo of dirty energy have raised barriers to the clean energy growth,” she explains. “The role of government is to set new floors. It’s a problem when government’s lowering the floor, putting new barriers that slow down growth, but it’s the role of society and the marketplace to raise the ceiling. I’m hopeful".

For example, in Richmond, California, a city that depends economically on the Chevron oil refinery, none of the politicians supported financially by Chevron were elected in the last election. “People said ‘Enough!’” explains Hope. “The impact of the refinery on the health of the community, and the security risks of literally having an explosion that forced everybody to go inside and seal their windows wasn’t worth the economic benefits that Chevron brought to Richmond. There has been a huge push for new industry to come to Richmond, including solar, and a total political change in the last midterm election.”

Hope believes in the power of American optimism. She thinks that the social movements like Black Lives Matter and for respect for immigrants and against police violence are part of the change. “We’re starting to see people saying, ‘This isn’t the kind of world we want to live in.’ American culture is better than this. We know how to treat people. We know how to get energy from non-polluting sources.”

One of the first projects of The Solutions Project was to support a law in New York that makes solar panels affordable and available for people who live in apartment buildings without roof space. They were also behind a campaign in California to reduce pollutants, to promote shared solar power, and to commit to 50% renewable energy by 2030. The last of these laws didn’t get approved due to an intense lobbying campaign by the fossil fuel industry. However, she’s still hopeful. “Five years ago, to speak of a law that would reduce oil consumption by 50% would have been unthinkable.”

California and New York are competing for renewable energy leadership. “The competition to see who can shine the brightest is good,” Shanley Hope assesses, admitting that she’s rooting for her hometown of Buffalo and not her adopted California, as New York is the underdog. “Also, for California to continue to be a leader in clean energy, it needs that pressure from New York.”

The idea behind The Solutions Project is that we’ll get to 100% renewables sooner or later, and they’re pushing for as soon as possible. The Hispanic community plays a very important role in this process, not only because of the demographic change happening, but because in poll after poll (Green for All, Sierra Club, EcoAmerica) the deep support for action on climate and clean energy is in the Hispanic and Latino communities, more than even among white residents. “It's an incredible opportunity to shift who's leading on these issues, who’s driving and designing solutions, in addition to who's voting,” adds Sarah. “Groups like Presente.org, Voto Latino and Democracia are really tapping into that overwhelming support for clean energy and climate action. Culturally, there’s a great opportunity for Hispanic and Latino communities across this country to influence the general public. There’s also much more of a connection to land, food and the environment, air and water, forests and rivers.”

For Sarah, climate change will end up becoming an important part of the next elections. “Martin O’Malley, who did incredible work on clean energy in Maryland, and Bernie Sanders have made 100% part of their campaign,” she adds. “Hillary Clinton appears to be focused on continuing the progress. The Republicans keep denying climate change, even though many of their constituents are seeing it happen around them. They have a different perspective. They want clean energy because of the independence that it offers. They want clean air and water for their families.” According to a poll by NASCAR, the car racing series followed mostly by conservative voters, 80% of their fans want solar energy. That’s why The Solutions Project, following their goal of 100% clean energy for everyone, it’s launching a project with NASCAR.

ecoheroes
Please check your e-mail for a link to activate your account.