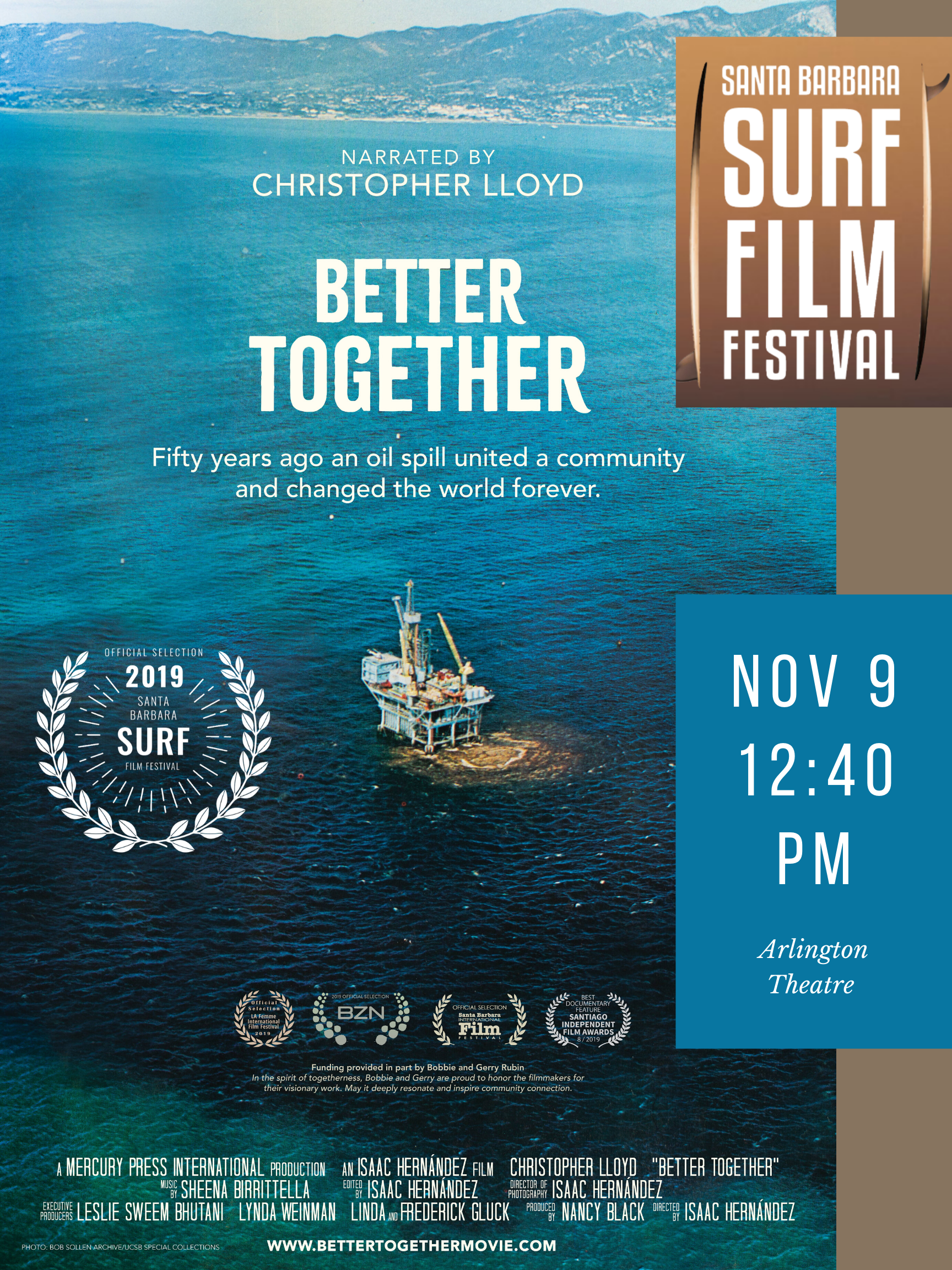 Screening at the Santa Barbara Surf Film Festival on November 9 at 12:40pm

The catastrophic effects of four million gallons of oil spilling on the ecologically rich Santa Barbara Channel for most of 1969 changed Santa Barbara forever, and ignited a global shift that resulted in new laws and protections for environmental health. Through the years, the community has continued to come together in the face of disasters. The 47-minute documentary covers community response from that 1969 oil spill to the devastating 2018 Montecito debris flow, and on to community-generated response to climate change.

The effects of the 1969 oil blowout were felt across the world, inspiring the EPA, Earth Day, the National Environmental Policy Act, the Clean Air Act, Clean Water Act and Endangered Species Act.

Better Together features an array of local activists, including Direct Relief’s President and CEO Thomas Tighe, as well as California thinkers and scientists like oceanographer Sylvia Earle, Paul Ehrlich (author of The Population Bomb)  and Solution Project’s founder Mark Jacobson.

Santa Barbara is rich with community organizations; several, including the Community Environmental Council, the Environmental Defense Center, and the Environmental Studies Program at the University of California, Santa Barbara, were born directly out of the 1969 oil spill. They're featured in Better Together with the Gaviota Coast Conservancy, Santa Barbara Channelkeeper, Direct Relief and many others. The Santa Barbara Bucket Brigade gathered over 3,000 volunteers to dig homes and trees out of the mud, and was was born, coincidentally, on the 49th anniversary of the oil blowout.

Director Isaac Hernández (Madrid, Spain) offers a poetic and hopeful look at what’s possible at a global level through local action, featuring many solutions generated in Santa Barbara, from the birth of curbside recycling to the first solar-powered energy micro-grid in the continental United States at Direct Relief’s headquarters.

Better Together won the Best Documentary Feature at the Santiago Independent Film Awards (August 2019) and was a finalist for the Best Special Focus Documentary at LA Femme International Film Festival (2019), for films produced, directed and written by women. It was also a finalist for the Ted Turner Prize for the film that best encourages environmental stewardship at the 2019 BZN Film Celebration, and featured its world premiere at home at the 2019 Santa Barbara International Film Festival, where it was awarded two additional screenings.

Isaac Hernández came to America from Madrid, Spain to study film at Brooks Institute of Photography. His career took him into photography, journalism, painting and writing plays, before returning to produce short films for nonprofits, finally directing his first feature. He’s working on a memoir about the impact of censored American films during his childhood in Franco’s Spain, and a film on the 50th anniversary of UCSB's Environmental Studies Program.

Nancy Black cofounded Mercury Press, and is a syndicated columnist with Tribune Media Services and the Chicago Tribune. She was president of the Pesticide Awareness and Alternatives Coalition that successfully campaigned to reduce the use of pesticides in public parks and schools. She serves on the board of Gaviota Coast Conservancy, Committees for Land, Air Water and Species (CLAWS), and The Israel Palestine Project. She's been co-producing short films with Mercury Press for years, and this is her first feature film.

When Nancy Black and Isaac Hernández met in 1991, they had a dream to make films together. They founded an animation company which evolved into Mercury Press International, and went on to publishing stories and photographs in over 300 publications in 27 countries, including Wall Street Journal, National Geographic Traveler, ESPN, Focus, Stern and USA Today. Now they produce books (including In Love With Earth by environmental elder Marc McGinnes, which chronicles some of the stories in the film Better Together), documentary films and journalistic videos for nonprofits (clients include United Way, Direct Relief, Santa Barbara Scholarship Foundation, Tri-Counties Regional Center, CALM, and UCSB Arts & Lectures).